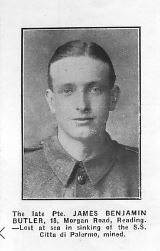 James Benjamin Butler was born on the 11September 1898, the son of Benjamin Herridge Butler and Isabella Butler.

James was a private in the Army Service Corps, 605th Motor Transport Company. He was aged 18 years when he met is death on 8 January 1916 when the Italia transport ship SS Citta de Palermo was blown up in a mine field.

The Citta di Palermo left Brindisi on the morning of January 8th, 1916, with a number of troops for Durazzo, including a British contingent of four officers and 139 other ranks. At 8.30 a.m., when six miles N.E. of Brindisi, the vessel ran into a small minefield. She struck one of the mines and foundered almost at once. Fortunately a number of minesweepers were in the vicinity and they came to the rescue although two Royal Navy drifters also struck mines in the process and were blown up.  The number on board the Cittd di Palermo was just over 200, of whom about half were saved including 84 British.

James Benjamin Butler was lost at sea and his name is remembered on the Holly Brook Memorial, Southampton. His name also appears on the family grave in the Reading Cemetery. There is no indication on the headstone that he lost his life in the war simply his date of birth and death.

Edwin Ritchie was the husband of Minnie Elizabeth Clements Ritchie of 3, Watlington Street, Reading. He died on the 31 December 1918 aged 36 years. It has not benn possible to find further information about this man.

Sidney Herbert Baverstock died of wounds (gas) on the 25 April 1919. He was the husband of Annie M Baverstock of 116, Rupert Street, Reading. Sidney was born in Andover in  1878.  Both the 1901 and the 1911 census have him living in Reading. In 1911 he was living in the same house as given at the time of the grave registration. He was father to three children, Dorothy 9, Herbert  8 and Mary 4 years. His occupation was given as biscuit mixer at Huntley and Palmers.

The grave number is 6582 and has a CWGC headstone.